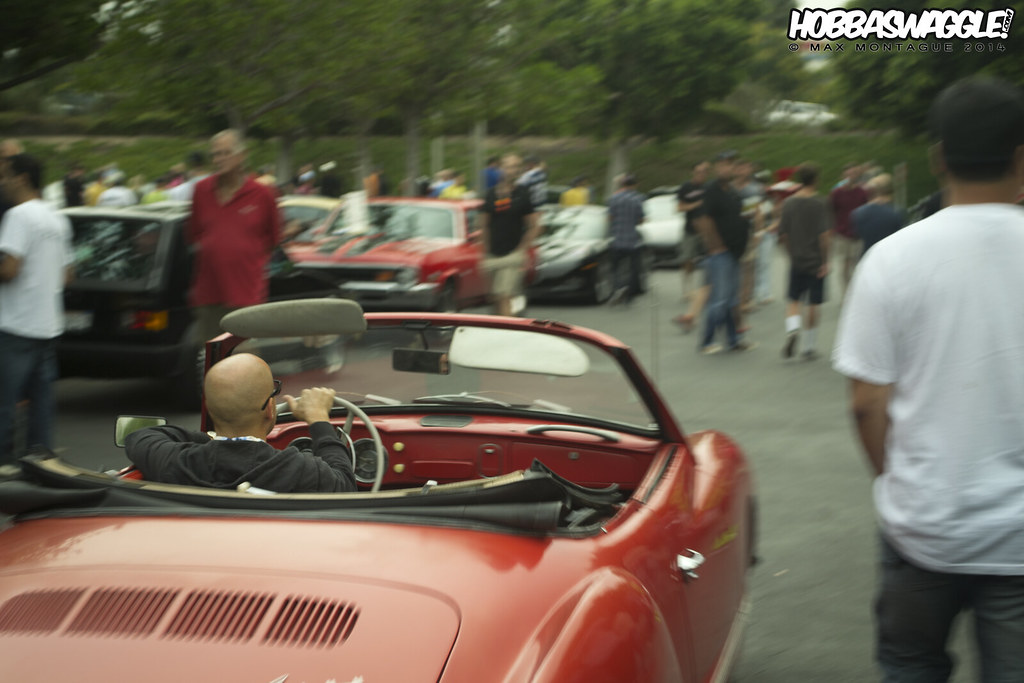 Well, I finally made my big move to Costa Mesa recently and I decided to celebrate by attending the always amazing weekly Cars & Coffee event held in Irvine, CA since I couldn’t make the drive up to San Jose this weekend to join everyone at Wekfest. As usual, there was plenty to feast my hungry camera’s lens on! This Falcon was the first thing I saw when I got into the lot, this resto-mod style is about as cool as it gets! “Broke Soul” NB Miata looking like it was ready to tear up the canyons. This 240sx hatch has got to be the definition of a drift missile! It was pretty entertaining hearing the owner tell the stories of every dented panel and broken and re-welded support… Something about this NSX really bugs me… The combo of the black accents and the machined lip on the wheels, along with the grey and yellow window banner gives it a weird, dated look.  It IS still an NSX though and an extremely clean example (physically, not aesthetically). A group of men drooling over an Aventador casually parked in a fire lane. I’ve seen this red Hakosuka a few times around Southern California and every time I do, I get to hear people explaining to their unknowing friends how rare and special they are.  I almost wish they’d keep it a secret so there wasn’t such a huge crowd surrounding them whenever they park! When just driving an Aventador isn’t enough, be sure to slam it and throw a set of HRE 501’s on (oh, and they’re special order only). Yes, that IS a record player in the cab of this 1960 Pontiac Bonneville! 56 Cadillac Sedan Deville aired down to the frame and perfectly worn. Does it get any better?? Wrapping up the day with these two BMW’s I passed on the way out that seemed strategically placed to have people gawking all over them as they walked back to their cars from the meet.  I got a little creative with these and tried my hand at photoshopping all the trees, lights, manhole covers and other ugly stuff out of the shot and I’m pretty happy with the results.  I usually like to edit my shots as little as possible, but for these two in particular all the crap in the background was really distracting.  Hope you’ve enjoyed this visit back to one of my favorite meets and stay tuned for more show coverage coming up soon!