Norm Reeves Honda in Cerritos hosts a number of great free meets and shows throughout the year and while I make sure I attend their annual show every year, I haven’t really gone to many of the meets they host during the week…until now. From 7 to 10PM last night the lot normally full of customer cars and new Hondas for sale was jam-packed with a horde of heavily modified Hondas and their owners milling around mingling and snapping photos of some awesome local heros. I arrived shortly before the sun began to set so I got to take a few off-tripod roll-in shots before it got really dark, like this RSX sitting low and static over some nicely contrasting Work Emotion CR. Michael Mao’s NSX never ceases to turn heads and draw attention, and why not!? The combination of function and form comes in few finer varieties than Honda’s classic supercar. Love the color on this S2000 on Regamaster Evos, easily one of my all-time favorite wheels. Another S2000 built in a completely different style, this time topless on a set of custom BBS RS and quad exhaust exits. Talk about rolling hard! A lot of people talk derogatorily about Diamond Racing wheels but it’s hard to deny the aesthetic appeal they provide on a project like this. Gorgeous ITR in Phoenix Yellow, aka the best yellow ever. Seriously slammed EH2 Civic with the ‘JDM’ equivalent of rat-rodding This ITR was so clean it was almost impossible to take a picture of. It’s like, how much more black could this be? and the answer is none. None more black. And if you get that reference we can be friends. While some may doubt the functionality of a heart-shaped roll cage, I question what function you think it serves! 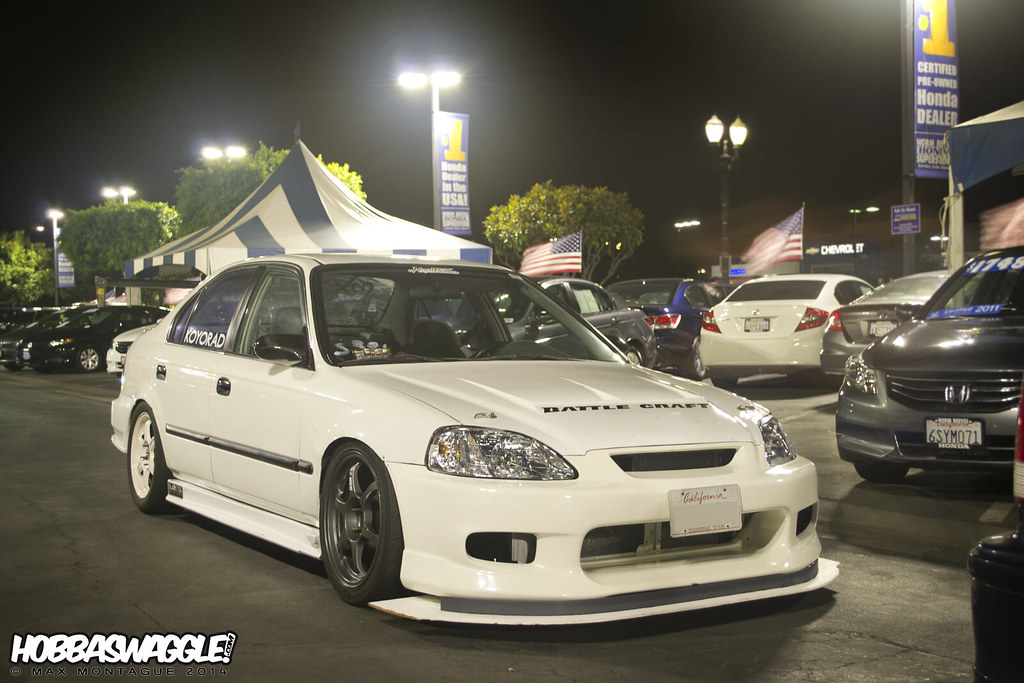 I don’t think anyone expected nearly so many cars to show up and people were parking wherever they could find space. I actually got to the meet early enough to score the Fit a parking spot, and I was really glad I did.  I don’t usually park my car ‘in’ meets and I’ve only entered it in one show because I’m not happy with where it is at the moment and I’ve got a storage unit full of parts to put on it….just not the money or personal know-how to do so!  I got over myself though and was happy to be one of only three Fits in a sea of Civics and Integras. It’s waaay too easy to make the “how did they drive that here from Hawaii” joke. Just don’t do it. Bagged DA Integra on XXR’s, unfortunately a brand that popped up on a few vehicles around the meet.  This car would jump up so much higher in many people’s books if he rode on some real wheels… Maybe they’re just for daily but I’m not opposed to being anti-replica. Finishing off last night’s shots with Mike’s NSX all by its lonesome as people started to head out and the parking lot once again emptied for business the following day.  Hope you’ve enjoyed reading/looking at these photos as much as I had taking them!