My attempt to attend last year’s Eibach Honda Meet was met with miserable failure.  I made the long haul all the way out to Storm Stadium near Lake Elsinore with all my gear charged up and ready, tons of water and snacks in my pack, aaaand I forgot my wallet.  Needless to say I was fairly frustrated with myself as it meant I could not get into the show since I did not know anyone else attending that year.  I ended up having a great time shooting the HUGE dirt parking lot and cars as they were leaving, but I was resolved to make it into the show next time and to be fully prepared.

Flash forward to May 2014.  After obsessively checking my pockets and backpack a million times, I went into the Eibach meet knowing I could effectively get INTO the show and I was excited to see what had so barely eluded my grasp last year and I was not disappointed.  I’ve broken my Eibach coverage up into two parts because I’ve got so much to share, today we’ll be focusing on more of the track-themed builds from the day… 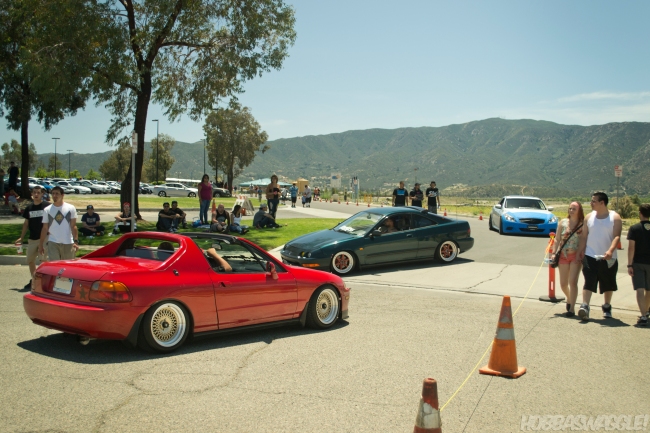 Watching cars navigate driveways is always an entertaining past-time at any show and people were scraping up and down this one all day.

I have been a big fan of the first-generation TSX ever since high school when I got to drive one owned by a friend of mine, I love the simple lines of the car and this height/roof spoiler/wheel combination looks fantastic. 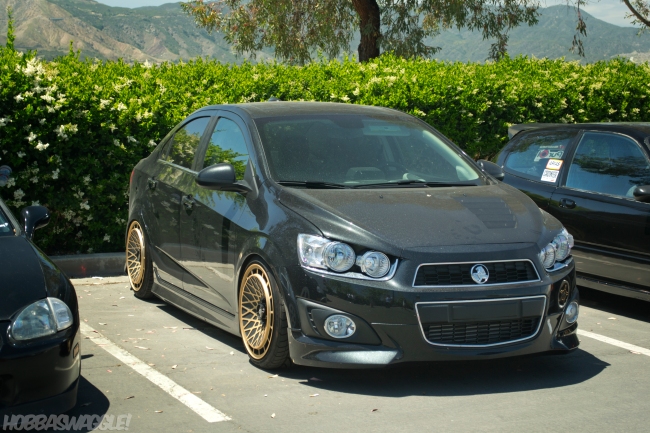 Another cool parking lot find on the way in was this Chevy Sonic masquerading as a Holden Barina slammed over a set of Mtechnica Turbos. 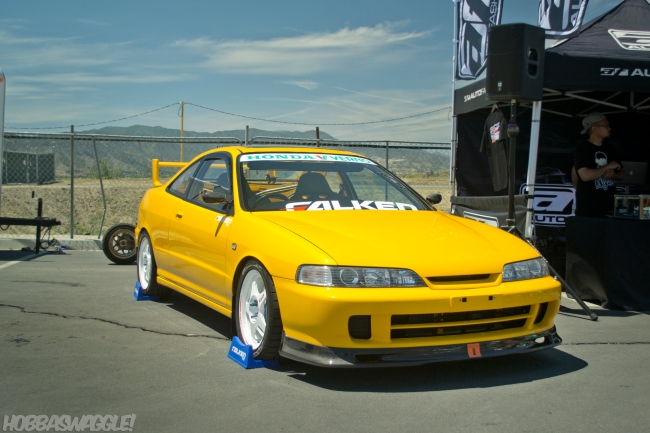 Immediately after entering I was greeted by this archetypal example of the Honda/Acura Integra.  JDM ITR front-end conversion, Regamaster Evos, Mugen type 2 spoiler, Spoon front lip, and flawless Phoenix Yellow paint make this a standard other Integras should be measured by. 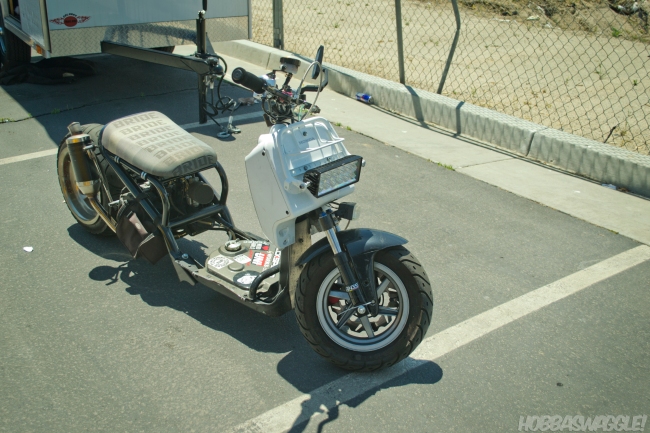 Can’t have a Honda meet without a Ruckus or two!  I was honestly expecting to see more, but I was really digging the squat on this one. LED’s and Bride upholstery automatically makes everything cooler, right?

Being a Fit owner, I’m often overly-critical of most of the examples I see but Note’s ’09 GE was basically the first second-gen Fit to get the track treatment in the US.  He does not mess around and has kitted it out with essentially everything Buddy Club makes for the chassis, making it a surprisingly potent track machine.

The red/dipped gold look grabbed a TON of attention when Mike Mao applied the treatment to his NSX last year and it turns out the color combo grabs just as many looks when executed on this ITB-equipped, Mugen faced DC-chassis Integra. 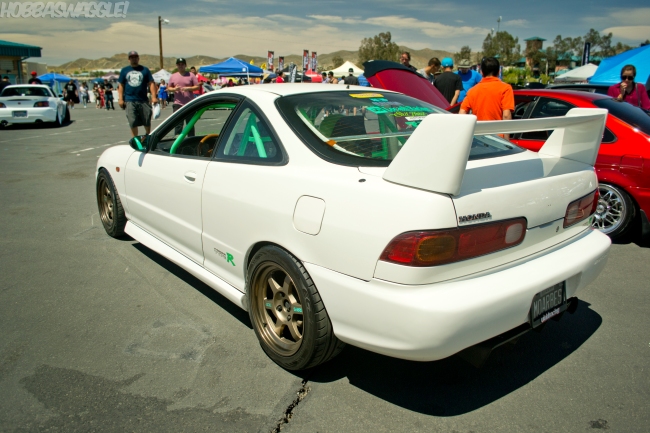 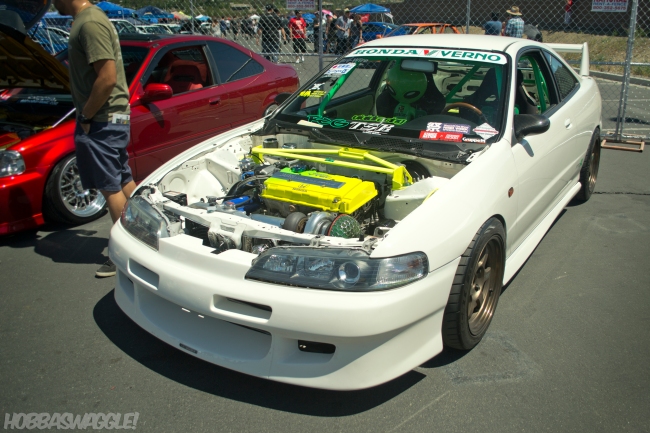 Right next door was this JUN-themed Integra on bronze Volk TE37.  The color-matching on the wheel, body, and window stickers is a nice detail. 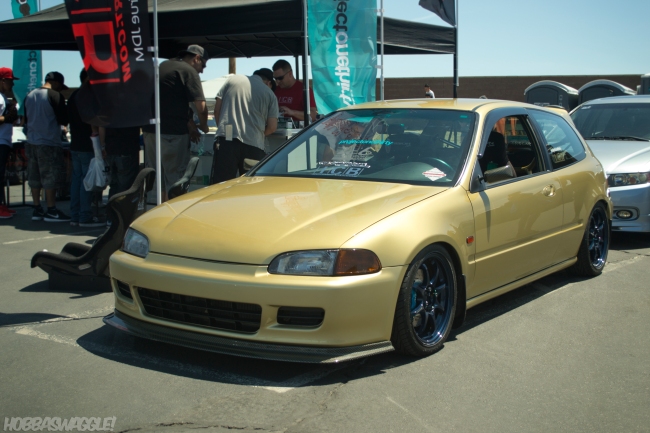 Over at the ICB booth they were displaying their nice clean EG civic. Sidenote, this picture took me four separate return trips to get because there was such a huge crowd around it the whole time! 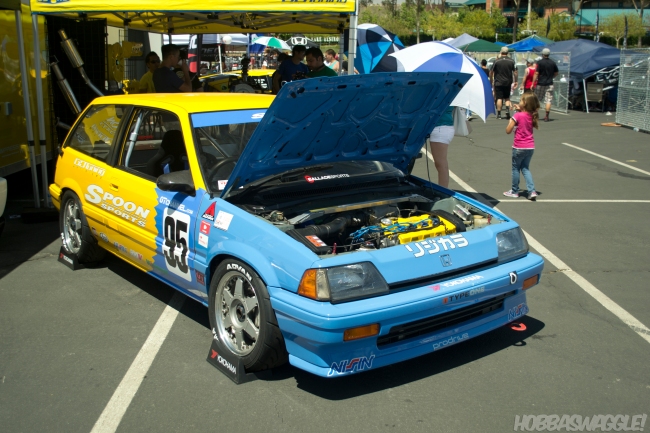 Seeing (and hearing) the DOHC ZC-swapped Spoon EA civic was quite a treat, this thing was insanely loud and everyone at the whole meet was very familiar with it’s exhaust note by the end! 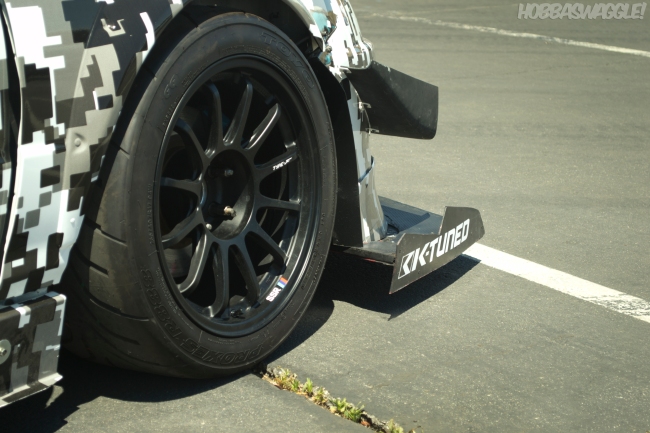 Another serious track car on display was the Jackson Supercharged Sportcar Motion Integra sporting a crazy digital camo pattern that made it kind of hard to look directly at, if I’m honest, which I guess is the point of camouflage.  Definitely an insanely detailed build though and i LOVE the look of SSR Type F’s. 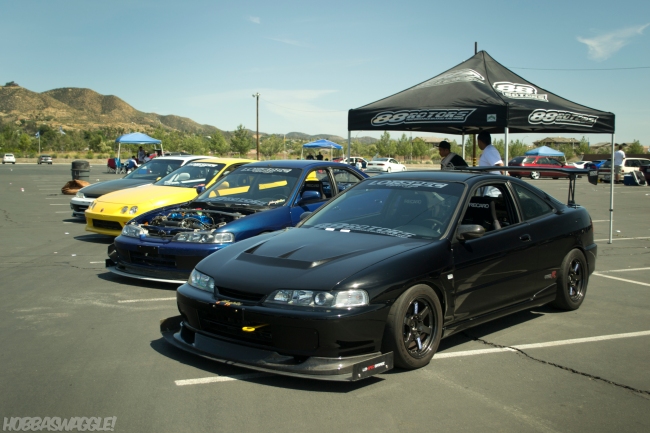 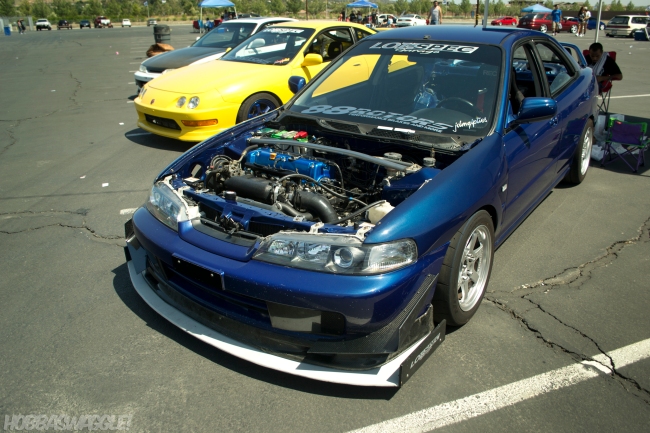 A couple of the Loi-Spec and 88Rotors Integras that were sporting some serious aero and TE37’s.  Really happy to see some functional straight-track builds at a meet like this where most people simply try to grab attention by being as outlandish as possible. Don’t get me wrong, I can definitely appreciate some ridiculousness as well (as will be covered in pt.2) but performance-oriented Honda builds have always attracted me because of their combination of light weight and capability of insane revs, plus they always have that underdog thing going for them when compared to high horsepower rwd cars. 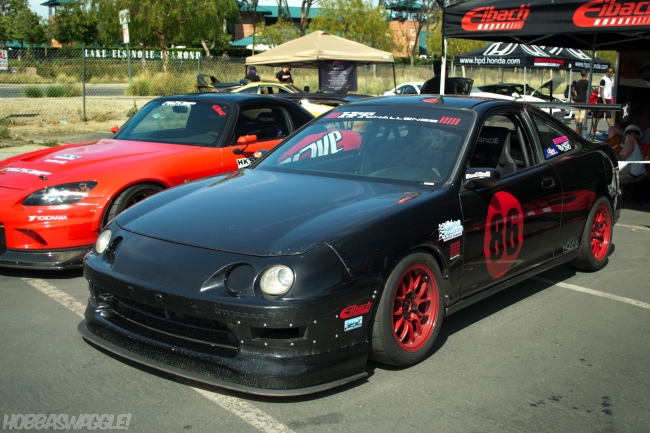 Another serious Integra build, this time with a Spoon theme running throughout.

ASM S2000 prepped for some corner-munching fun, offset airflow holes in the front bumper and the painted sides on the Voltex wing add some cool character. 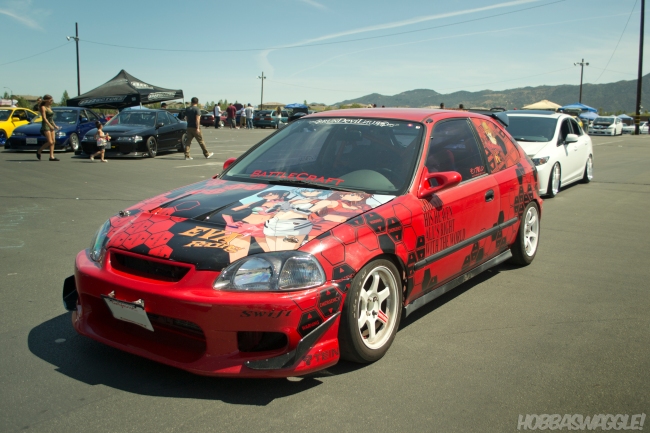 Thanks for checking out the beginning of my Eibach 2014 coverage, I’m going to wrap up part 1 with this awesome Evangelion Itasha themed eK on TE37s. There’s a video floating around of these guys showing off their fear and respect-inspiring kanjo-style drafting skills on the way to the event…Let’s just say I was expecting red paint all over the rear of his buddy’s car.